Every so often I get a little too big for my britches and try to make something basic into something fancy, just to show off. Case in point, last summer I needed to make something to take to a potluck picnic. Everybody loves meatloaf, but few of my generation seem to know how to make it, which is in itself a bit of weirdness that would qualify for its own blog post someday, so I decided I would make a meatloaf. I didn’t want them all to think I was a lame cook, though, so I decided to make a tri-colored spiral meatloaf. I got ground turkey, ground pork, and ground lamb, and I seasoned each differently. The lamb was Greekish, with lemon zest and oregano. The turkey was Middle Eastern, with cumin, garlic, and so on. I can’t remember what the pork one was supposed to be. All of them had salt and pepper, of course. I spread first the pork, then the turkey, then the lamb in a big rectangle, jelly roll style, then rolled then up into a spiral, whacked off hunks the size of my loaf pans, and baked.

What a lame meatloaf. The color differences were too indistinct for the spiral to be noticeable, unless you were really looking for it, and the flavorings sort of blurred together too, so the result was a weird dark-beige-on-light-beige spiral with a horrible muddle of herbs and spices. Only the lamb had a respectable amount of fat in it, so the overall loaf was dry, too. 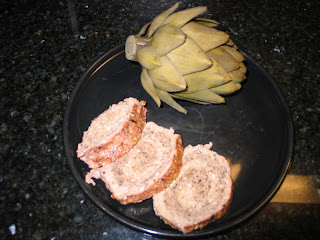 (Note to food stylists: if you’re going to put an artichoke on the plate before photographing, use a raw one. Cooked artichokes are delicious but ugly.)

Next time I made meatloaf, I used the recipe God gave us: fatty hamburger, salt and pepper, a bit of oregano. Since I’m gluten intolerant, I used minced shiitakes instead of milk-moistened breadcrumbs, but I hardly think that qualifies as a massive departure from the sacred meatloaf recipe passed down through generations. I mooshed it all together with my bare hands, globbed it into a loaf pan, baked, and served with ketchup. It was way better.