Once the menu is sketched (it can and likely will change somewhat over the coming week), we figure out the shoping list. We always get lots of stuff at Nordic House as well as Costco and your basic grocery store (Albertson’s or Andronico’s), but this year we had to figure out where to get our German stuff. Victoria used The Google (as our only President calls it) to figure out some options, but we didn’t get any clear-cut answers, so we decided to take it to a higher authority: Katja, my German-born friend and colleague in the localization industry, who lives in San Jose.

Saturday around dinner time, I rang her up and asked, “Who’s that German butcher you were telling me about?”

She chuckled and replied with certainty: “Dittmer’s!” She also provided sage advice about the menu, and we had a lovely chat, and then she wished us a good “slide” into the new year: “Einen guten Rutsch ins neue Jahr!”

So a trip to Dittmer’s and Nordic House is in the plans for Tuesday. (I think it should be Nordic Huset, but I suppose that might confuse their neighbors. We’ll try to get to Costco today, though, so we can get the giant hunks of salmon marinating for the graved laks. You only need three days for a good graved laks (aka gravlax), but I think a week is better. 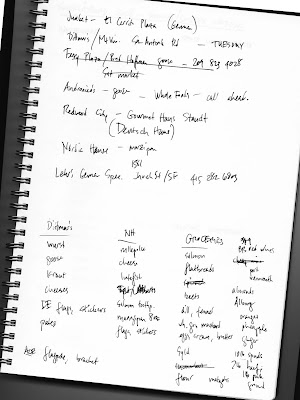 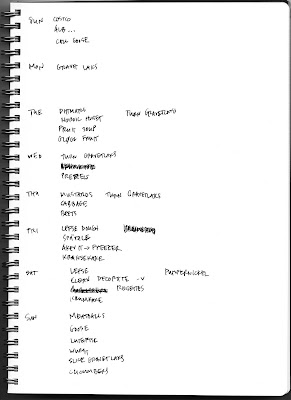 At left is the shopping list so far. This year’s list is deceptively brief and manageable-looking, but that’s only because Jane is taking care of about a third of the stuff herself and has her own lists (which perhaps she’ll publish here shortly), and because we’re getting good at throwing smørgåsbords and have already been stocking up on a bunch of the basics. We also have probably forgotten a couple dozen things and will be making many a last-minute trip for forgotten items. Traditionally we end up borrowing obscure ingredients on Saturday from our next-door neighbors Jaryn and Pete, too. (Jaryn is the maker of the beloved deviled eggs; I have yet to try one because they’re always demolished early on. This year she hinted she might dress them up in little dirndl skirts.)

Next we figure out the schedule of events. Lots of the items need to marinate, stew, soak, or otherwise get started well in advance, so first we fill in the must-start-soons. Then we fill in the other menu items, saving Friday and Saturday for the most perishable and/or most complicated or hard to store items. At lower left is the time-line thus far. This is subject to a lot of change, and by the end of the week it’s unlikely to look anything like this. Perhaps we’ll post before and after photos of the timeline about a week from now.

Our final act of planning was to taste the German schnapps items. It’s become a tradition to serve one Norwegian akevit plus an akevit from the guest country. We asked Katja’s advice about what would be the German answer to akevit. She in turn asked some friends, and on their advice, we tracked down some Doornkaat (a German gin) and Gilka Kaiser Kümmel (a German caraway liquor bearing vague resemblance to Scandinavia’s akevit) at the Mountain View BevMo. We all thought the Doornkat gin was pretty harsh (Jane compared it to isopropyl alcohol and made ready to rub some on her arm in case any injections were imminent), but the Kümmel was interestingly sweet. A second sip of gin after tasting the Kümmel was quite pleasant, though, proving once again that taste is greatly dependent on context. We decided they’ll do! They’ll also both be better at the usual serving temperature, which is right out of the freezer.