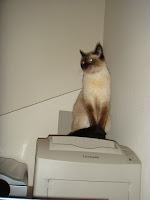 This printer has been going by the name “Norton’s Napzone” for as long as I’ve owned it, but the new kitty seems to have claimed it as hers. I might have to rename it “Syltetøy’s Bathzone.”

The new kitty arrived on Thursday. She is a 10 month old sealpoint Siamese, and her full name is Sigrid Syltetøy Williams Vang. She’s got a wee infection in one eye, but it’s clearing up nicely. She spent her first several days hiding in the bedroom, but lately she’s been prowling around the house and taking up her position in the household. Gudrun Gjetost hisses at her occasionally, but if Syltetøy has claim on a lap, Gjetost just piles right on.

Her kittyhood seems to be serving her well in regard to Candy: it hasn’t occurred to her to worry about dogs. She was napping on my lap, and Candy was curled up on the couch next to me. Eventually my lap wasn’t wide enough–she unfurled herself full length, depositing paws on Candy’s flank. Candy sort of raised an eyebrow but stayed put, and before long Syltetøy was kneading Candy’s thigh.

About the name, Syltetøy, pronounced SILT-uh-toy, more or less. Way back in 1999 I spent a few weeks vacationing in Norway with my friend, Lucy, who couldn’t get her anglophonic mouth around the sweet brown cheese often eaten for breakfast, gjetost, pronounced YIE-toost, and it became a bit of a joke among us. Later when I was traveling with another friend, Sarah, who’d majored in Norwegian and was now doing graduate work in Oslo, we got to talking about my plan to get a pair of kittens. I’d just lost my two step cats–Barty had died, and Norton had gone with his mom when we broke up. I’ve always loved sealpoint Siamese, so the plan was to try to find a couple Siamese or Siamese mutts at the SPCA. 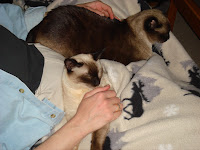 What to name them?

Mirthful giggles followed. But what to name the other one?

“Well, everybody eats gjetost with jam, so why not Gjetost and Syltetøy?”

A few months later, back at home, Norton came back to me. His mom was opening a new restaurant and working all hours, so she decided he’d be better off in his old house where his stepmom was a lot more available. The courage and generosity of her decision has always impressed me. So, with Norton back in the family, I didn’t think there’d be room for two kitties. That spring I met Gjetost at one of the SPCA’s mobile adoption clinics and adopted her on the spot. I opted to give her the first name, Gudrun, after my grandmother, so that there would be a name that people in my vet’s office could handle, and Gjetost is her middle and daily-use name.

Gjetost will be ten in September. Now, finally, she has her sister, Syltetøy, and during the drive home from her foster home in Vacaville, I realized that her first name had to be Sigrid, after Sigrid Johnson the noted singer and choral conductor at my alma mater, St. Olaf College. Yes, the little dear was rather vocal during the drive, but it’s more that she seemed Sigridian.

Gjetost is mostly called Gjetost, or Miss Thing or Cheese Kitty, and Gudrun is pretty much just her medical alias. Syltetøy so far is mostly Syltetøy, but Sigrid, Jam Kitty, and The Little Tyke seem to come into play fairly often, too.

Here’s something that never happens: the California Dept of Transportation has been working faster than Google! 😉 Traffic has been flowing through the rebuilt sections of the MacArthur Maze for a couple weeks now, but Google Traffic still shows traffic from the Bay Bridge to the East Bay detouring through West Grand Ave:

Speaking of amazing, the Maze was put back together in less than a month, when most people in the Bay Area including me thought it would take several months to a year. How was this possible? The story teaches several lessons for project managers.

1. Smart chartering. The Governator declared a state of emergency and chartered a rebuilding project the same day as the Maze Meltdown (as we locals have been referring to the disaster). By declaring a state of emergency, the State of California was able to waive literally years worth of red tape in procurement regulations, environmental impact reports, equal opportunity hiring requirements, design requirements, and on and on. They had bids submitted, a winner chosen, and a contract signed the very next day.

2. Smart contracting. California built significant incentives for early completion into the contract: $200K/day. The winning contract was a below-cost bid of $867K. The state estimated it would cost $5.2MM and take 50 days. By completing it over a month ahead of schedule, C.C. Myers’ firm earned the maximum bonus of $5MM—a handsome $2.5MM profit over the builder’s actual costs—not to mention immeasurable positive publicity.

2. Smart resourcing. Before submitting its bid, the winning firm had made a deal with a steel supplier that included sharing 25% of the profits if the steel could be delivered to spec, on time, for early completion.

3. Smart scheduling. C.C. Myers had workers on the job site 15 minutes before the contracts were signed, and he had crews working 12-hour shifts around the clock.

Another scheduling trick: while the massive steel girders were being manufactured in Arizona, construction work was already underway in Oakland. Normally girders and construction would be in a finish-start relationship, but they did it in parallel, literally in a finish-finish relationship: the last of the concrete was poured right after the last girder arrived.

And another: normally a full batch of girders would be completed and then all shipped together, but to save time on this project, they sent each girder up to Oakland as it was finished, with two drivers in each truck so that they could take turns and drive nonstop.

4. Smart compensation. The firm shares a percentage of profits with all its workers, so the workers all had an incentive to take on the hard work it would take to finish the project quickly.

5. What about risk management? Remember the old project manager’s triangle: time, cost, quality. Push one side, another suffers. California prioritized time by allowing higher costs, but did this affect quality? The typical problem with fast-tracking construction projects like this is that often corners get cut and safety suffers. On this point, time will tell. C.C. Myers has an unusually good track record with these kinds of emergency projects, but it’s not spotless.

So obviously there’s a big risk. According to the Project Manager’s Body of Knowledge (PMBOK), a project managers’ choices for responding to risk are to avoid, transfer, mitigate, or accept it. Let’s consider these options for the Maze:

Avoid. The risk is obviously unavoidable; even without time and cost constraints, there is no such thing as perfect, risk-free, overhead highway construction, especially in the land of earthquakes. I don’t think avoid was ever an option here.

Transfer. I haven’t seen the contract between California and C.C. Myers, but I would be surprised if it didn’t have a whole bunch of clauses spelling out C.C. Myers responsibility to repair and redo any defects shown to be its fault. This transfers the cost and responsibility for responding to quality problems from California to C.C. Myers, but is cost really the issue here? No. Lives are the issue: if this highway is unsafe, people could be injured or killed, and the real risk is borne by the citizens of California. So much for transfer.

Mitigate. Again, I imagine there were some contractual provisions to mitigate the State’s risk. I imagine they also mitigated some risk by opting to rebuild to the original design, which had stood the test of time and already survived several major earthquakes (this section of the Maze had been undamaged by Loma Prieta in 1989).

Accept. Under the circumstances, probably the only real choice was to accept the risk. Avoiding was impossible, transferring was a limited possibility, and mitigating would have broken the schedule requirements. That leaves accept.

How did they do?

I drove through the rebuilt section twice last week, and I couldn’t tell where the repairs had been made. Yesterday I drove through a neighboring stretch of the Maze and could finally recognize the section by its scaffolding and the progress of painting.

Here are some links if you want to read more: